The term “throw” is perhaps the biggest misnomer in the pro audio industry.  The reality is sound does not throw, but “propagates” through the air. The distance over which sound propagates and still remains intelligible basically depends on the ratio of acoustic signal-to-noise at the listener’s location.

While many audio pedants (myself included) will cringe at the mention of “throw”, the audio industry has widely adopted this terminology to describe the relative distance a loudspeaker can produce an intelligible signal at a volume level sufficient for the application.

Let’s Throw Some Light on This

Short throw loudspeakers have a high frequency waveguide with very wide dispersion or low “Q” (100-120 degrees). They typically operate at low-to-medium levels simply due to the closer proximity to the audience.

Typical applications include front-fill /stage-lip speakers, under balcony /over balcony delay speakers, and distributed foreground music.  In all these cases, wider dispersion is necessary in order to cover the audience located very close to the arc of the loudspeaker.

Air absorption is seldom a problem as distances are so short.  Examples of QSC short throw loudspeakers include the AcousticDesign Series AD-S4T, AD-S6T, AD-S8T.  The AP-5102 with its 105-degree coverage is actually one of the highest output short throw boxes available.

Medium throw loudspeakers have a high (or mid/high) frequency waveguide with an average dispersion (75-90 degrees). These are most popular when deploying a stereo pair in a mid-sized auditorium, theater or gymnasium.  Because they need to cover a larger area, higher output is required. This is typically achieved by narrowing the horn pattern below 100 degrees and increasing the woofer cone size up to 10”, 12” or 15”, thereby increasing the loudspeaker’s sensitivity and power handling.  Examples of QSC medium throw loudspeakers include the AD-S10T, AD-S12, AP-5122 and AP-5152.

Long throw “single box” loudspeakers are quite specialized and have a mid/high frequency waveguide with a very narrow dispersion or high “Q” (40-60 degrees). The narrower horn pattern increases on-axis sensitivity, which is matched by employing high-powered woofers (or even dual woofers). The net result is very high acoustic output to counter the effects of attenuation over great distances.

Typical applications include any venue with grandstand seating and high levels of ambient crowd noise to compete with.  One challenge with high Q loudspeakers is the waveguide needs to be very large (18-36”, both in width and depth), which results in very large enclosures.  Another challenge is air absorption of higher frequencies (particularly in dry conditions) which is why most loudspeakers lack “sizzle” when listening at great distances.

The “mist” setting covers a wide area but lowers water pressure so the water does not travel very far. This is the same as short throw speakers, which lose sensitivity due to the wide horns and small woofers.

The “spray” setting is not as wide, but the water pressure increases slightly allowing the water to travel further. This is the same as medium throw speaker where the sensitivity increases due to narrower horns and larger woofers.

The “jet” setting is very narrow, which greatly increases the water pressure and results in the water travelling much further across the garden. This is the same as long throw speakers where the sensitivity is optimized.

Column speakers were very popular in the 1970’s and have seen a resurgence in recent years, especially for challenging spaces with high levels of reverberation or ambient crowd noise.  Column speakers use a vertical array of small drivers which sum on-axis (and cancel off-axis) to provide a very narrow vertical “lobe” of energy.  A tall column speaker can provide excellent “throw” for speech reinforcement or paging announcements in these difficult environments.  You can check out QSC Column Surface-Mount loudspeakers, including the AD-S802T and AD-S162T.

Line Arrays add a new angle (no pun intended) to the “throw” topic.  Line Arrays typically use rigging hardware that can be articulated (adjustable splay angles between boxes) allowing the user to customize the high frequency wave front.  For example, we have all observed the classic banana shape of a line array at a concert or event.

At the top of the array it appears to be virtually flat. This is because the splay angles between boxes are very small (0, 1 or 2 degrees).  These smaller angles result in more overlap of the high frequency waveguides generating a very loud “long throw” section of the wave front for the further-most seating.

Towards the middle of the array there is progressively more curvature (3-6 degrees between boxes), which reduces the high frequency overlap and generates a “medium throw” section of the wave front for the general seating.

At the bottom of the array you will see the widest amount of curvature (7-10 degrees between boxes) which minimizes any overlap of the high frequency waveguides, and results in a quieter “short throw” section of the wave front for the front-most seating.  Examples of QSC articulating Line Arrays include the ILA series, the WideLine 8 Series and the WideLine 10 Series.

Be sure to know your throw, before you throw down your dough! 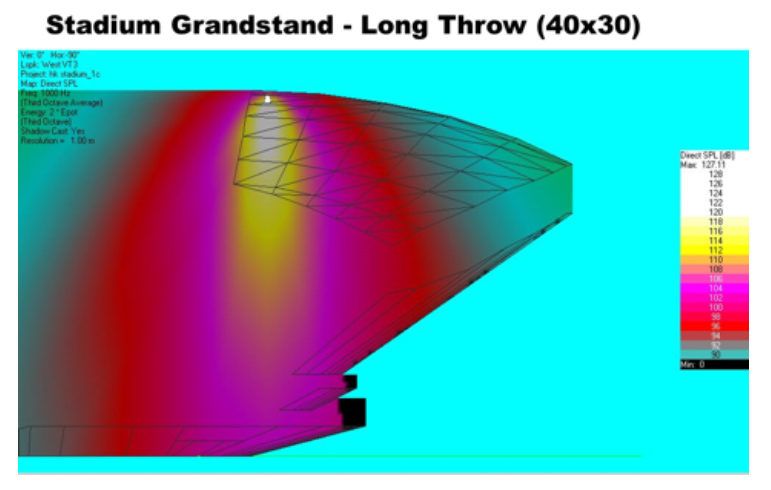 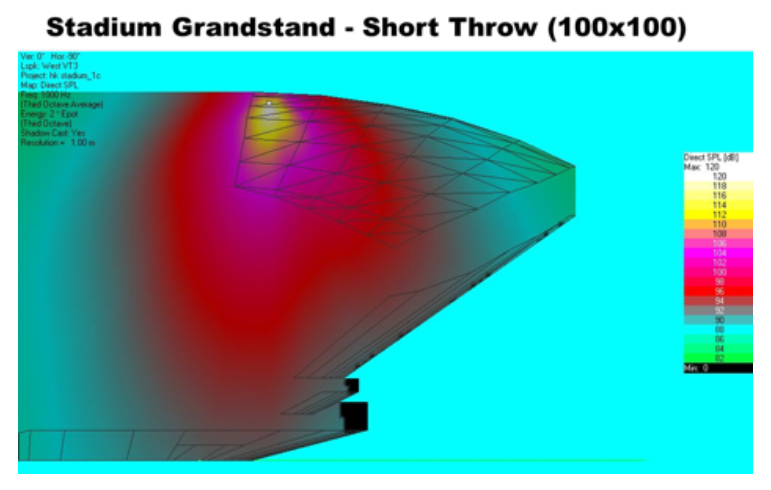