The success of the Q-SYS Platform has always been rooted in delivering new value at the software layer. That tradition continues in a major way with the release of Q-SYS Designer Software v9.3. Among the many new features being introduced, I’m particularly excited to share a new enabling technology that will bring improvements to how users deploy video within Q-SYS.

This new interoperable network streaming technology called “Mediacast” brings higher quality, low-bandwidth IP streams to Q-SYS. While the technology will set the foundation for future software enhancements, there are some significant improvements that optimize USB video bridging and camera streaming in this new software release.

Prior to Q-SYS Designer v9.3, when deploying the Q-SYS web conference integration solution, users had access to a single high-resolution IP stream and a single low-resolution IP stream. These were the only choices a PC application could select for video bridging, which limited performance options and forced users to create workarounds when their preferred resolution was not selected.

This new streaming technology improves this scenario by giving the PC application far more options for video stream resolutions and framerates. The PC communicates the video parameter request to Q-SYS and then the stream from a Q-SYS PTZ-IP or NC Series camera is delivered it to the Q-SYS video bridging device of choice, where it is decoded and scaled for the PC.

Users will also notice a crisper image using H.264 with less noticeable compression compared to previous PTZ-IP Streams (MJPEG for high-resolution streams), at lower bandwidth. Legacy Q-SYS PTZ-IP cameras have a maximum data rate of about 12 Mbps, while the new NC Series cameras can top out at 30 Mbps. It’s important to note the image quality for Mediacast streams at 30 Mbps will offer an incredible improvement over their predecessors at half the bitrate.

Another benefit of this new technology is the significant reduction in latency from the lens of the camera to the USB application, which reduces potential for audio visual synchronization issues.

You’ll notice that the wiring looks almost identical to the Q-SYS Camera Components in previous versions; the only difference being the wiring pin looks like a “play button” rather than a camera.  Also, when routing multiple cameras, you will use the new “Mediacast Router” which replaces the Camera Router component.

And as always, there’s more to come in the future for this technology, so stay tuned to future Q-SYS Designer Software releases! 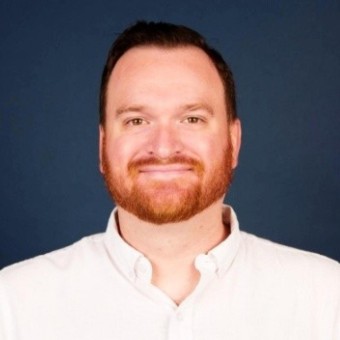 Mike Brandes is the Product Manager for Q-SYS Video Solutions. Mike has been in the Audiovisual industry for the last 10 years focused on building better meeting experiences and brings a passion for problem solving to develop new Q-SYS solution which solve customer pain points. Prior to QSC Mike worked at Vaddio and as a higher ed technology manager. In the rare instances Mike is not working, you can find him watching soccer, or with his dog Walter.